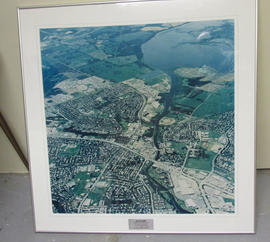 St. Albert physician, Dr. Fin Fairfield, founded the Big Lake Environment Support Society (B.L.E.S.S.) in 1991. The non-profit organization had 23 founding members. Their aim was to raise interest of the public in Big Lake and protect the natural wildlife on or near the lake, as well as making available recreation activities at the lake including walking trails, canoe trips and bird watching. On January 10, 2002 the organization was named the provincial stewards for the Big Lake natural park which had been designated Special Places site in 2000. In 2005, the site became a provincial park and was named Lois Hole Centennial Provincial Park.

Activities of the organization include over ten years of bird count records for the Big Lake area. In 2006 they implemented a water quality monitoring program, obtaining baseline water quality data for Big Lake, its inlets and outlet. B.L.E.S.S. have built a viewing platform at the lake and a shelter on the Red Willow Park Trail. They have added signage relating to bird species at the lake. With help from Alberta Parks, they installed a web camera on the shores of Big Lake. They were active in the protest of the West Bypass road. B.L.E.S.S. also sponsors summer education programs hosted at the cabin at St. Albert Trail and Sturgeon Road.

B.L.E.S.S. has received two awards, the Alberta Emerald Award for Environmental Excellence and the 2005 Steward Service Excellence Award. The society has nominated Big Lake for the Special Places 2000 program and the Important Bird Areas program.