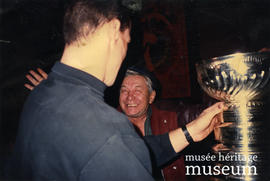 Stanley cup in the Bruin Inn

This photograph depicts the back of Mark Messier standing with one hand on the Stanley Cup in the Bruin Inn, St. Albert. Walter Belcourt is smiling and facing the camera.

This fonds consists of a birthday card from Belcourt's wife, a get well card, and two Christmas cards all addressed to Walter Belcourt (1998.04.02). There is also an invitation from Mr. and Mrs. P.C. Irvine to attend the wedding of their daughter, Anne, to Malcolm Eric Fraser on April 13, 1968, including an envelope and RSVP card (1998.04.05). There is a tax assessment from the Canadian Department of National Revenue Taxation Division issued in 1968 to Walter Belcourt (1998.04.06). There is a calendar front from the Grandin bakery depicting Canada geese flying (1998.04.04). There is a postcard with a picture of the Red Rock Crossing in Arizona and a message from Val and Bill to Walter and Lily Belcourt in 1983 (1998.04.03). The fonds also contains two photographs from the Bruin Inn. 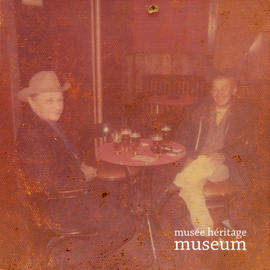 This photograph depicts Walter Belcourt sitting (right) at a table in the Bruin Inn with an unidentified man.