Map is the Edmonton, Dunvegan, and British Columbia railway route map, Edmonton-Smith division, Mile 0 to Mile 131. Produced by the Office of Chief Engineer, 21 Nov 1918. The map depicts the railway route drawn in red heading north starting from the northwest boundary of Edmonton, past St. Albert, along the Pembina River and Athabasca River to Lesser Slave River. St. Albert settlement is shown with river lots.

Fun Map of St. Albert depicts a cartoon drawing map of mainly the St. Albert downtown area and the businesses located there. The back of the map contains a business directory of the businesses that sponsored the map as well as a schedule of festivals and events in St. Albert, and some advertisements.

Map depicts an aerial photograph of the City of St. Albert overlain with hydrographic features and elevation. The map is printed in 7 segments, two segments are missing.

This is a map of downtown St. Albert in 1945, includes Mission neighborhood and old street names for Braeside and Sturgeon. Riverlot numbers are overlaid on the map. 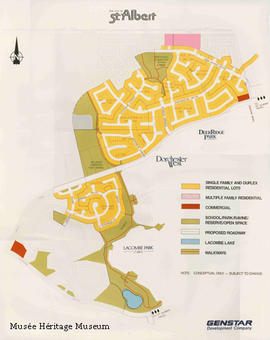 This is a conceptual map for the Deer Ridge Park neighborhood in St. Albert by Genstar Development Company.

Map of Lacombe Park area in St. Albert, showing the subdivisions of streets and river lots 20-22. It was done by G.D. Price of Edmonton as a part of the Alberta Land Surveyor group.

Riverlot and township map of St. Albert and area, showing Villeneuve and HBC reserve. Includes township and river lot owner names. Map is attached to a wooden dowel at the bottom.

Map of St. Albert and district on a cloth material.