File consists of a photograph of Brain Mulroney, the 18th Prime Minister of Canada, shaking hands with Neil Crawford, former executive assistant to Prime Minister John Diefenbaker and Member of Legislative Assembly of Alberta. They are at some sort of banquet, which also has an unidentified lady looking at the two men shaking hands.

File consists of one portrait of a clown in the studio. The clown has his legs stretched out and is wearing a colourful red, blue, yellow, and green jacket, yellow pants, and has orange hair and a hat. 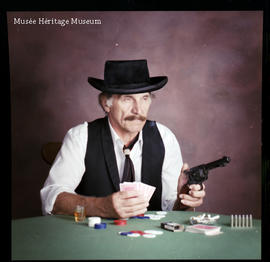 File consists of photographs of Don Getty, the 13th Premier of Alberta, and his wife Margaret Inez Mitchell. They are posing for pictures. In one photograph, they are in a group with Joe Clark.

File consists of one photograph of Arnold Skitsko, a friend of Victor Post and owner of Copperfield Plastic Fabricators Ltd. in Edmonton. Skitsko is standing beside the batmobile vehicle that he built at an airplane hangar. Smaller airplanes can be seen in the background.

File consists of photographs of the Zarowski brothers, Morris and Nestor, who lived as hermits at a place they called Tranquility Place, which was located Southwest of Edmonton. Nestor later changed his name to Nestor Rose. Photographs consist of Victor Post's visit to see the brothers among their outdoor living area of Tranquility Place, along with Lena Post, Anne Post, and Leona D. Weixl. Also included is a newspaper article, discussing the brothers' history, living arrangements, and conversations with the Post family on their trip. Another newspaper article discusses Nestor Rose's graffiti work for God in Edmonton. The 2 VHS cassettes seem to have a CFRN Edmonton production on the brothers, entitled "A Simple Life: The Zarowsky Story" and "A Simple Life: Nestor and Morris Zarowsky".

File consists of 1 photograph of Nick Taylor posing to a television camera and holding what appears to be a Victor Post photograph of the Calgary Olympics opening ceremony. Nick Taylor was the leader of the Alberta Liberal Party from 1974 - 1988 and also served in the Canadian Senate from 1996 - 2002. Victor Post can also be seen in the photograph, looking at the unidentified man.

File consists of one portrait photograph of Kate Mistol, who is an Emmy award winning television journalist, businesswoman, member of Calgary's Top 40 under 40, and multiple MARCOM, Hermes and Videographer Awards for excellence in video production. She was also the President and Co-Founder of Baby Bump Inc., an all natural line of maternity and children's skin care line. She is currently executive producer at Kicker Inc.