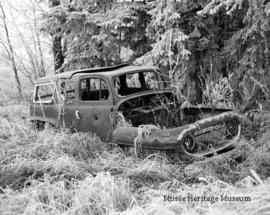 Photographs of King Hussein during his royal visit

This is a framed photograph depicting a panoramic view of a mountain and river.