Board of Trustees for the National Gallery of Canada

File consists of records relevant to Victor's Post tenure as Board of Trustee for the National Gallery of Canada from 1992 - 1995. File also consists of records relevant to Victor Post's association with the Canadian Museum of Contemporary Photography (CMCP), an affiliate of the National Gallery of Canada. Included are such items as correspondence with MP Van de Walle, membership card, framed certificate of appointment, general information folder for meeting of Trustees, gallery examination report, memos, invitations, flight itineraries and tickets, gift cards, letter of appointment to board, and reimbursement letters for expenses. There are also photographs of the Board of Directors and Ottawa Parliament area. Also included is an exhibition book, "George Steeves: 1979-1993", published by the CMCP.

Series consists of predominately photographs taken by Victor Post of people he knew over the course of his personal and professional life. Photographs predominately cover significant well known figures, but also some unidentified people. The photographs do not seem to a part of any obvious commission work done by Post.

File consists of photographs of pianist and vocalist, Liberace, at a book signing in Edmonton for his autobiography. 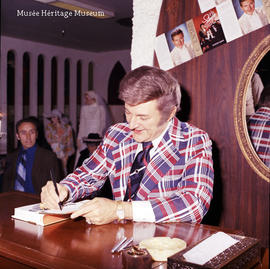