This file consist of material given to Len Bracko by the Legislative Assembly at the event of the 100 Year of Democracy celebration in Alberta in 2006. It includes a a booklet that lists members of the Legislative Assembly in Alberta from 1905-2006; a special edition of Alberta Hansard; the program, menu, and pin from a celebration dinner in March; and four photographs (2015.05.01.01-2015.05.01.04).

File consists of news articles, correspondence, Post's exhibit proposal and a program regarding the science fair. 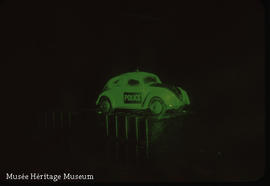 File consists of the science fair's program, ephemera, airplane tickets to London, photographs of Post's trip to London and correspondence.